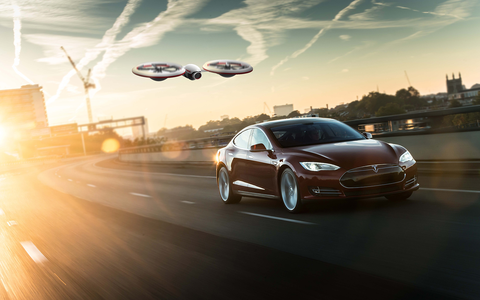 At most Tesla events we’ve been to, we always find at least one Tesla owner with a drone. It begs the question… what if Tesla Motors built it’s own drone? According to one enterprising Industrial Designer, a Tesla Drone could be “a unique reinterpretation of drone ingenuity.”

Why? Industrial Designer, Fraser Leid* takes a stab at what a Tesla concept design might be — he explains, “The common issue with personal drones today is their lack of battery capacity, which in turn, limits their flight time to 20 minutes and their charging time to an hour. With that in mind, I associated the drone design to a company synonymous with battery efficiency and incorporated an effective battery integration concept. The second key component I addressed was related to design and straying away from convention. By not replicating a Quadcopter, but configuring a new twin blade design that allows the propellers to act as the drone camera’s stabiliser, a gimbal isn’t required for video stability.”

Leid continues, “If the operator requires the drone for slow, wide-angled panoramic video’s, the propellers in a vertical configuration will allow the drone to move slowly and steadily. If the operator requires the drone for fast-paced, low-angled action video’s, the propellers in a horizontal configuration will make the drone nimble, quick and easy to handle at faster speeds, while also steadying the camera.” Pretty cool. We know Tesla Motors CEO, Elon Musk, has recommended a fifth mode of transport, the Hyperloop. Nevertheless, we’d love to see what Elon Musk and the Tesla Motors team would dream up if they ever ventured into something like this. In the meantime, we’ll have to settle for this unique “interpretation” of a Tesla Drone, see below…